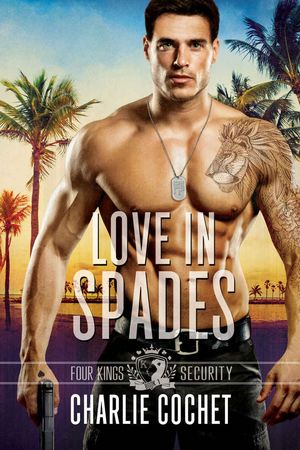 Ex-Special Forces soldier Anston “Ace” Sharpe is fighting a different battle these days—one involving the world of private security across the state of Florida. As part owner of Four Kings Security, Ace and his fellow Kings tackle everything from armed transport and investigations to cyber intelligence and executive protection. Cocky, fearless, and brash, Ace isn’t afraid to take risks.

After years of working alongside his father, Colton Connolly is ready to take the helm at Connolly Maritime, but his father’s retirement is put on hold when Colton begins receiving death threats. If that isn’t bad enough, his father signs a contract with Four Kings Security to provide Colton with round-the-clock protection, despite his adamant refusal. Colton’s life has been turned upside down, the last thing he needs is a shadow, especially in the form of infuriating, sexy-as-sin Ace Sharpe, who seems to be on a mission to drive Colton mad.

Sparks fly the moment Colton and Ace meet on a sultry night club dance floor. But getting involved with a client, even one as fiery and beautiful as Colton Connolly, is a line Ace is unwilling to cross. Colton might be attracted to Ace, but he’d been burned before. He might be willing to put his life in Ace’s hands, but not his heart.

As the Florida nights heat up, so does their passion, and Ace and Colton are faced with a difficult choice—take the plunge and risk it all, or play it safe and walk away?

If Ace can keep a deadly threat from robbing Colton of a future….

This is my first book by Charlie Cochet and it was about time. As you may have learned by now, I love reading M/M books, and Charlie is one of the biggest names out there writing that kind of books. So, a new saga was the perfect time to jump into the author’s bibliography. I don’t regret it!! I will make sure to put some other books by her into my pending list.

This book tells the story of Colton, the heir of a successful business that is being targeted with some nasty threats. His father takes action and hires the best security company he can find: Four Kings Security. One of those Kings, Ace, is assigned to shadow every move of Colton to make sure nothing happens to him. They are both very stubborn men and the mix is a bit toxic at first. Buuuuut, little by little they realize they are attracted to each other and something more serious starts brewing… Obviously, they need to keep it a secret while Four Kings Security investigates the threats.

Even though I consider this book Romantic Suspense, the suspense part doesn’t have a real highlight until the end. Usually, that would have made the book much worse; but Charlie manages to create an unexpected twist that makes the mystery salvageable. But I also must say the twist per se doesn’t make much sense. Was that all planned or there was a lot of improvisation? Because if it was a plan, they left a lot in the hands of chance… I guess everything was needed to make Ace more heroic in Colton’s eyes. Even though he was already awestruck.

My favourite character of the book is by far Ace. He is so much fun to read!! I LOVE his sense of humor. The way he banters with everyone and his goofy ways that make him so approachable and, I must confess, so much attractive. I always support a good clean sense of humor in Romance and, in this one, Charlie excels at it. I hope that is part of her trademark and it’s present in more of her books. Good job, really!!

I didn’t like Colton that much. That character is a bit confusing and, sometimes, he behaves like a rotten child throwing a tantrum. And other times, he behaves like an incubus throwing… well, other things. I know the true Colton is somewhere in between, but as a reader I couldn’t help yelling at him to get his act straight. I don’t know who I’m tryng to convince… He is really a good guy. I’m just jealous!!

Another fun fact about this book: it’s packed with gay men everywhere!! Don’t get me wrong. It’s not a bad thing at all, but it’s a bit weird that almost every man in the book prefers dating other men. Where do you say the story takes place? I’m looking for a room… It makes me wonder why the Kings are all single when there are so many and willing candidates…

There is also something I don’t like at all about this book. It presents us too much of upcoming books: Laz and Red? Frank and Joshua? Those pairings are very similar and it looks like they are not going to be as much fun as Ace and Colton. But I could be wrong. I hope I’m wrong!! It’s just that I feel I’ve been robbed of the best part in Romance Books: the slow burn of the first encounter.

Next book it’s going to be published this month, so I will put it on my list to read it as soon as possible (this year, if I have time). It’s going to be Red’s and Laz’s story… I’m not feeling very optimistic about those two, but I will keep an open mind.