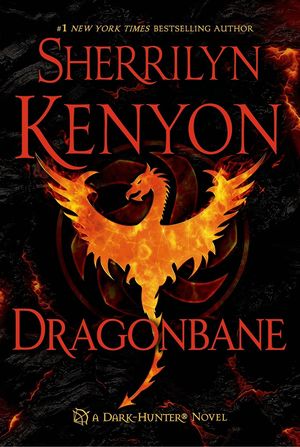 Out of all the mysterious boarders who call Sanctuary home, no one is more antisocial or withdrawn than Maxis Drago. But then, it’s hard to blend in with the modern world when you have a fifty foot wingspan.

Centuries ago, he was cursed by an enemy who swore to see him fall. An enemy who took everything from him and left him forever secluded.

But Fate is a bitch, with a wicked sense of humor. And when she throws old enemies together and threatens the wife he thought had died centuries ago, he comes back with a vengeance. Modern day New Orleans has become a battleground for the oldest of evils. And two dragons will hold the line, or go down in flames.

This is book 24 of the Dark-Hunter saga. 24!! And I’m not even up-to-date. This month, the 27th will be published. Some people may be tired of Kenyon’s crazy world, but I love it even more now that it has got so big. My intention was to catch up with this saga before the new release, but I have to be honest with myself and drop the dream. I like to mix my books to make the hobby more fun. I will catch up, of course, but I’m not in a hurry.

This book is the book of Maxis, the weredragon that has been living in Sanctuary for a long time. He was betrayed by his mate and left her. The dragon thought she was dead, but suddenly appears in Sanctuary looking for him. Unfortunately, she wasn’t alone. Her queen Nala is with her, a long time enemy of Maxis. Even though he thought Seraphine hated him, she doesn’t tell her queen that her mate is close. Everyone leaves except Sera and the make-up ride begins.

The story is rather simple. What is complex is the world that Kenyon has been building over the years, so there are a lot of pieces all over the table. Keeping track of everything could be daunting, but the author does her best to make the book easier for the reader. The cast is so big, that a big chunk of the book is just to introduce one character to another and build the relationship among them. If there is something I love about Kenyon’s style is her sense of humor and outstanding banter in the dialogs. That makes the reading such a wonderful experience. It’s like a Christmas dinner with a family (a rather huge one). It doesn’t matter how long you have been away… you are always welcome!!

That is why I can forigive Sherrilyn almost everything. I can even forgive that this book is a bit… lazy. Several times, she builds tension around a situation and then it ends abruptly: the rescue of Max’s children, the recovery of the Emerald Tablet, the escape of Sera and Max after the accidental stabbing… All those situations seemed pretty huge and dangerous, but they are resolved “behind the scenes”. As a reader, that left me a sour aftertaste. I wanted a big fight against the demons, but I guess that wasn’t in Kenyon’s plans. I was expecting more for those moments, so I’m a bit disappointed by them.

As always, the best part of the book are the characters. It’s obviously that she loves creating new pawns for her world and Im glad for it. In this case, Hadyn (Max’s son) is my favourite addition. I have no idea if she plans to make a book for him, but I hope there is one in the future!! Yeah, I have a weird crush even though we barely know him!!

My favourite moment of the book: the reunion between Nick and Acheron. It’s not a proper meeting, but they get to be in the same room and they behave!! They even exchange a few words!! As a huge fan of Ash and Nick, I am relieved to see that their friendship is not as dead as it seemed. Or maybe it was just that the situation called for adults and not kids throwing tantrums. Nah, I prefer the optimistic explanation. If there is something I have a huge respect for in the Dark-Hunter books is the optimism. It doesn’t matter if everything looks lost, there is always a light that the heroes can follow to triumph.

Obviously, they are going to need that light to face the Apollo and Kessar situation. Is there going to be a bloody conflict or will be resolved easily as the situations in this book? I’ll know the answer with the next one, which I plan to read this year if everything goes as planned.