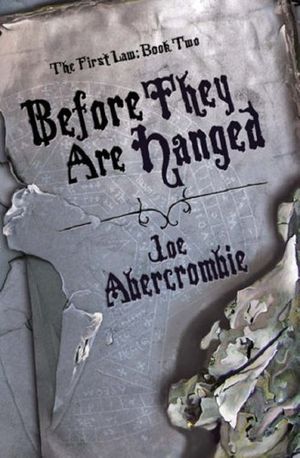 Superior Glokta has a problem. How do you defend a city surrounded by enemies and riddled with traitors, when your allies can by no means be trusted, and your predecessor vanished without a trace? It’s enough to make a torturer want to run – if he could even walk without a stick.

Northmen have spilled over the border of Angland and are spreading fire and death across the frozen country. Crown Prince Ladisla is poised to drive them back and win undying glory. There is only one problem – he commands the worst-armed, worst-trained, worst-led army in the world.

And Bayaz, the First of the Magi, is leading a party of bold adventurers on a perilous mission through the ruins of the past. The most hated woman in the South, the most feared man in the North, and the most selfish boy in the Union make a strange alliance, but a deadly one. They might even stand a chance of saving mankind from the Eaters. If they didn’t hate each other quite so much.

Ancient secrets will be uncovered. Bloody battles will be won and lost. Bitter enemies will be forgiven – but not before they are hanged.

The year is almost over and I can already say that the first two books of the First Law Trilogy are the best ones I have read in 2018. I’ve been always too scared of the Epic Fantasy genre, but in reality it has given me a lot of happy moments during my whole life (The Hobbit, The Lord of the Rings, Game of Thrones…). Joe has revived my interest for a kind of book I thought it wasn’t for me.

This second book is split into three different threads of action: the war in the North with West and Threetree’s gang, Glokta defending Dagoska from the Gurkish Empire and the quest of Bayaz and company. All of them are challeneged at every step and they will have to do their best in very tight situations.

Even though the three stories are not connected (at least not yet), that doesn’t make the book convoluted or hard to follow. Joe’s style helps the reader to enjoy the story and the characters without losing any step through the differente chapters of the book. Not time to breathe, though. The pace is so much faster than the one in the first book. All the presentations were done, so the author had plenty of time to feed us lots of action and epic battles. All of that without forgetting some character development for his amazing cast.

In the North we follow West and his annoying task of babysitting Prince Ladisla through the war agianst Bethod and his forces. The Prince is in command of the worst soldiers, because his duty was supposed to keep him far from the war. But between the cunning of the enemy and the glory starved idiots that follow the Prince, eveyrthing goes the south way. West is forced to drag the Prince all over the North in order to flee the enemy. At least they had the help of Threetree and his gang. During this ordeal, I didn’t want to sympathize with West after what he did to his sister; but he claims to be sorry over and over again and I guess that I believe him… That’s not enough to forigive him, but it’s a first step. West should check his anger issues or he is going to be very alone the rest of his life… Which could not be very long, because the situation in the North doesn’t look promising with Bethod and Flatheads working together… Kudos to the author for being able to add some good sesne of humor in the middle of a war!!

Glokta had it easier, but this guy is always uncovering hidden plots and corruption at every step he takes. His luck is holding, but sooner or later… His first task was uncovering who was the traitor among the Union in Dagoska. The one that tried to sell the city to the Gurkish Empire. I don’t think becoming a traitor was really necessary. With the war in the North, most of the Union forces were comitted there, so taking the city was a done deal without any hjelp from the inside. But give Glokta a mission and he will stick to it until the end!! He discovers the traitors in the city and tries his damndest to save the city. But it was hopeless, so he is ordered to abandon it before is too late. So far he seems almost lucky, but that is about to end. I foresee a third book with a lot of trouble for Glokta: the mystery of the murder of the other son of the King, the favours he owes to the bank, his soft spot for Eider will bite him in the ass sooner or later… I wonder if he will be still alive to meet Jezal again and see what his adventure has done for the cocky captain. Will his jelousy grow bigger or smaller?

And finally, the main quest: going to the end of the world to retrieve the Seed that will help Bayaz to fight Khalul. For that pupose, he recruited Logen, Ferro, Quai, Jezal and Longfoot. Everyone has their own pupose: Ferro can hold the Seed and fight, Logen can talk to spirits (the keepers of the Seed) and fight, Quai is there to take care of Bayaz, Longfoot is the navigator and Jezal… I still don’t know why the First Magi needed the Captain. It’s by far my favourite character, but his purpose in unclear. He can’t barely fight, complaints about everything and he is more of a burden than a help. Am I missing something? All in all, I’m SO glad he is in the quest. I knew this journey would change Jezal. Make him more humble and even more heroic. He is even badly wounded, which has left an ugly scar in his fomrley handsome face. All of that has made him a different person. A much better person. I loved him before, but now… I am a passionate defender of Jezal. I’m a groupie!!

Another character from that group that has gotten a lot of points on my particular ranking is Logen. I still don’t know what his Bloody-Nine persona is, but his “normal” self is amazing. Such a good guy. He may be big and dangerous looking, but his emotional intelligence is boundless. The Northman has an uncanny ability to offer everyone what they need at every moment. Friends like that are rara avis, so I hope the rest of the group appreciates what they have found. The one that has fallen several positions in the before mentioned ranking is Bayaz himself. He is on edge almost the whole journey, being very unfriendly to the rest of the company. And after that ending, I guess his sense of humor is not going to improve any time soon…

I’m going to be strong and not dive into the third book so soon. I will let this one rest and enjoy other genres for a while. The truth is I don’t want it to finish. I’m enjoying this saga so much!!