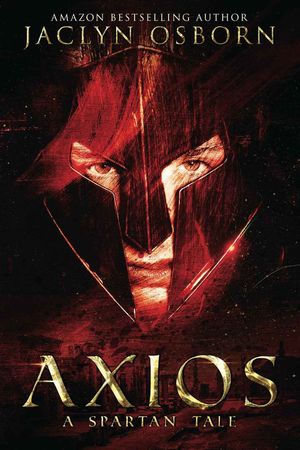 I am Axios of Sparta, and I was born to kill. At age seven, I left home to train with other boys where we were taught obedience, solidarity, military strategy, and how to withstand pain. My harsh upbringing stripped me of my weaknesses and forced me to become strong. Ruthless.

But, I craved something greater—a life I could never have.

Against all odds, and the toughest training a warrior could endure, I found an unexpected love in the arms of a fellow Spartan. He was the very air I breathed and the water that sustained me. Fighting side by side with him, we were invincible. Where he went, I followed.

However, there was no place for love in Sparta. Feelings were for the weak. The only life for a Spartan was one of battle and brutality with no guarantee of tomorrow. In times of war, all men were put to the test, but the greatest challenge for us was not one of swords and spears, but of the heart.

I rarely read Historical books. For some weird reason I don’t enjoy that genre as much as any other. I’m capable of immersing myself in a contemporary book, or in a fantasy world or maybe in a far galaxy full of wonders. But when I have to surround myself with historical events I usually get dizzy and lose the North. So, in order to pick a Historical book, I need a carrot. In this case the carrot was a M/M Spartan tale.

The book is written from the point of view of Axios, a spartan boy who is forced to start his training to become a warrior as every other male in that city. He is different from the rest, though. He is not bloodthirsty and has dreams beyond the so-called glory of battle. The other side of the coin is represented by Eryx, who excels at everything during their training and is a firm believer of the Spartan way. The unlikely friendship between the two of them blooms into sexual attraction and later into deep love. We, the readers, are invited to follow that journey through serveral years.

First of all, I must congratulate the author on the perfect guide tour for that period of time. It is far from being a History lesson, but the readers will get tons of fun facts about the life in the ancient Sparta. And by fun I mean the mostly bloody, cruel and desensitize life they have to follow to a T. Before reading this book, my interest in Sparta was non-existent; but now I know it is much richer and surprsing than what movies have shown us. The fact that this book has made me curious about it is already a huge accomplishment. Thumbs up for teacher Osborn!!

The book has two main weak points that are greatly surpassed by the good ones. One of them is the beginning. The pace at first feels too slow. In order to easy the reader into the way of things of Sparta, the story of the characters has to start when they are pretty young. After that, we have time jumps of two years until they reach their early twenties. Those first chapters felt much longer than they actually are. I understand the need of them, but a faster pace for them would have been great. The other weak aspect of the book is the action or, better said, the lack of it. We are being told the tale of some Spartan warriors, but there are barely any fight scene in the book. The ones we get are usually rushed and just long enough to deliver some emotional blow. I guess I was expecting much more action from a book based on that period of time. With those two complaints it could look like the book could be boring, but nothing would be further from reality. The hard truth is that Axios is not a book about warriors from Sparta. It is a book about love between two people who shouldn’t be involved with each other.

So, when you embrace the truth about this story, you are up fro a treat. This is one of the most beautful love stories I have ever read. It is unexpectedly sweet and full of heart-melting gestures. Every time Eryx looked for Axios’s hand to reassure him before a big event, the butterflies in my stomach would perform several summersaults to applaud that simple gesture brimmig over with true love. The whole book is cramped with those. I will forever be grateful for having been given the chance of witnessing their story through several years. From their initial shy encounters to the full power of their passion during adulthood. From friendship to unbreakable loyalty to each other. I have enjoyed every moment of it: the happy moments, the storytelling, the games, the constant support, the doubts, the fights, the sad moments, the extremely sad moments, the please-kill-me-now moments (yes, the one that will leave you crying like a baby for hours…). All of it!!

It is not perfect, but I will treasure the memory of this book until the end of my days. Even now some tears are threatening to come out just remembering the whole story again. This is the first book by Jaclyn Osborn I have ever read, buy I’m going to make sure that it won’t be the last.