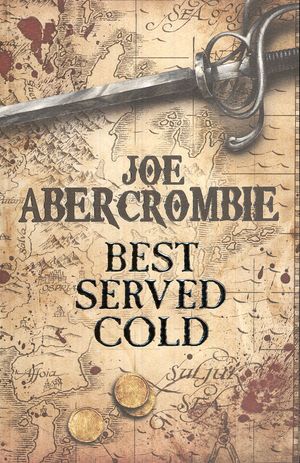 There have been nineteen years of blood. The ruthless Grand Duke Orso is locked in a vicious struggle with the squabbling League of Eight, and between them they have bled the land white. While armies march, heads roll and cities burn, behind the scenes bankers, priests and older, darker powers play a deadly game to choose who will be king.

War may be hell but for Monza Murcatto, the Snake of Talins, the most feared and famous mercenary in Duke Orso’s employ, it’s a damn good way of making money too. Her victories have made her popular – a shade too popular for her employer’s taste. Betrayed, thrown down a mountain and left for dead, Murcatto’s reward is a broken body and a burning hunger for vengeance. Whatever the cost, seven men must die.

Her allies include Styria’s least reliable drunkard, Styria’s most treacherous poisoner, a mass-murderer obsessed with numbers and a Northman who just wants to do the right thing. Her enemies number the better half of the nation. And that’s all before the most dangerous man in the world is dispatched to hunt her down and finish the job Duke Orso started…

Springtime in Styria. And that means revenge.

It’s no secret that the last book of The First Law Trilogy left me with a huge stab wound on my back. One that I enjoyed immensely. I was afraid of reading the rest of the books, because the bar was pretty high. But my fears were pointless. Best Served Cold is a superb book that has nothing to envy to the first trilogy.

The time we follow Monza Murcatto and her band of merry men and women in a killing spree to satiate her thirst for vengeance. Seven targets are between them and the peace of mind Monza is seeking. One of those targets is Duke Orso himself, so the quest is far more dangerous that anyone could expect. Lucklily for Monza, she has a lot of gold to buy “loyal” assassins.

As in the previous books, this one has upstanding characters that make that fantasy world much more appealing and enjoyable. But the character development doesn’t hinder the pace. The story is a non-stop festival of different kind of actions: dark alley assassinations, undercover missions, infiltration ala Assassins Creed, skirmishes, full battles… Anything in the field of murder you could think of it is possibly in this book. The book is divided in seven parts, one for every target. Any of those feels different from the others, which is something very positive for such a big book. Obviously, there are better and worse parts. My favourite is the one to kill Mauthis, due to the weird sense of humor displayed in those chapters. The worst (but not bad) the part for the murder of Faithful Carpi… there were too many changes and I couldn’t get over one when the next was happening.

Maybe you are wondering if this story is linked with the shocking finale of the first trilogy. It is a different story, but the “new” political context is mentioned more than once. And Sulfur makes a lot of cameos along the story to let the reader know that the Big Bad Baldy is still out there being the Master Puppeteer I love to hate. The Eater made me so nervous every time he was in a scene. You never know when the kicks to the gut and groin are going to start with this writer… Because I have learned that with Joe Abercrombie is not a matter of IF… it’s a matter of WHEN those kicks will start.

And talking about guts… Man, the other books were bloody, but this one has increased the gore to a new level. It is mostly contained with one character, though: the mysterious Shenkt. A powerful something that is creepily strong and has no problem in using brute force in the most twisted and bloody way you can imagine. I’m talking about fingers drilling skulls or heartbreaking hand-to-hand combat… He is SO scary! But one of the best characters of the book. There are not many pages with him, but all of them are pure gold and full of “I was not expecting that” moments.

The catalog of interesting characters in this book is unending. All the main ones have something special to remember them by. We reconnect with Shivers, the Northman who wanted to claimed vengeance over Logen’s corpse but who changed his mind to pursuit a better life. He ends up in Styria, full of hope and good intentions, but second chances are hard to come by. Monza recruits him for her quest and the journey makes him a different man. His plot line is by far the saddest one. As a reader I felt hopeless and helpless with the events unraveling before me that transform Shivers into a bitter man. I am actually scared of him now…

The Master Poisoner Morveer and his sidekick Day are a joy for the reader. I love the way he talks, how he considers himself superior to everyone else. I know he is a perturbed individual that I should ignore, but the way he sees the world through the “blindfold” he wears is one of the most special characteristics of the story. On the other hand, Day was underused and underdeveloped. I would love to have read more about her. I have the feeling there is much more about her that what we learn.

Other character that should have had more time is Friendly. He is so weird and interesting. We barely get to know any of the background that made him behave the way he does. He may be cold, but his honesty makes him a beacon of light in a world plagued with too much smoke and too many mirrors. I hope he comes back in any of the following books to get to know him better.

We also reconnect with Vitari, but her part is not very important except for a revelation that would break your jaw. My brain is still boiling with all the implications… And we also have a lot more of Nicomo Cosca. In this book he shines with all his splendor and he has become one of my favourite characters in this saga. Even though I’m not sure if we can trust him, but I guess that’s the main trait of the character…

Monza… At first I was 100% pro-vengeance, so I was Team Monza all the way. But during the journey we get to know her quite a lot and I wouldn’t like to consider her my friend even if that could cost me my life (so dramatic!!). She is too self-centered. First me, then me and last… ME!! She sacrifices friendships and loyalties with an unsettling easiness and when we discover the truth about Benna… I wasn’t sure if I should support Monza or Orso. I need good guys and bad guys, but I should have learned by now that I’m not getting that with these books. The only good thing about Monza is that she is going to be a thorn in Bayaz’s mighty ass, so she is still on my “OK” book.

An awesome fest full of great moments. I have already bought The Heroes to keep with this saga sooner or later, because this is getting better and better.