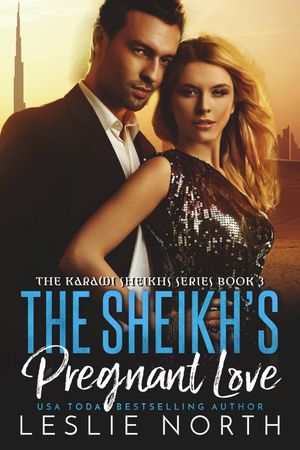 Danielle Greenski’s life is going to change in a big way. Single and newly pregnant, her days of traveling the globe for work and living a life of adventure are about to end. But not just yet—when she meets a gorgeous man who’s the perfect “last fling” before she settles down to mommyhood. After an amazing weekend with Sheikh Riyad Karawi, she’s totally fine with saying good-bye—until she’s kidnapped by rebels who think she’s carrying the Sheikh’s baby. Apparently, in addition to being a Sheikh, her weekend lover has some other big secrets he hasn’t shared. Like how he’s part of the country’s elite military squad. And wanted by rebels. And maybe the most intriguing man she’s ever met…

The last thing this womanizing charmer needs is to fall for a pregnant woman—it would completely blow the playboy persona he’s been using to get close to the rebel forces. But that’s what Sheikh Riyad is faced with after he meets American firebrand, Danielle. He can’t figure out why he feels the need to protect a woman he’s just met, why he can’t seem to get her out of his system—no matter how hard he tries—and why the thought of her going home is punching him in the gut. For now, he’ll just keep her around until he knows she’s safe. Or maybe, until he can convince her to stay.

If only he can make Danielle believe that he’s not just the playboy she met, but a man she could love forever.

This is the end of the trilogy about the Karawi brothers. In essence, it is very similar to the previous books, but I haven’t enjoyed it as much. I have committed the mistake of having greater expectations for it and I should have known better. These stories are just to kill some time during a summer day dedicated to the bliss of laziness.

This time we travel to Haamas to meet Riyad, the third brother who has always been described as a party boy and womanizer. The truth is he is a secret agent of the kingdom, whose main mission is to keep his family safe from the rebels. During one of those missions, she met Danielle, an American who was running from her previous life. When she becomes a target of the rebels, Riyad must protect her and the child she is carrying. Will danger allow them to develop as a couple or break them apart?

Even though the setting of this thrid story is very similar to the previous books, I must admit I haven’t enjoyed it as much. It is actually somehow disappointing. In the first book, Riyad ewas described as a womanizer and rather immature guy. In the second book, on the contrary, we get to see a surprising side of him when he is leading a team to take down some rebels. So, the mystery around him was pretty interesting and the third book was meant to be special. And it starts that way, actually. The first chapters are great, with the presentation of the two characters and the initial danger. But after that… it is pretty dull. I won’t say boring, but with the other brothers we had much more action than with the brother who is the “action man”.

You could think that with the reduction of action scenes, the romance should be better written. I’m afraid, this time is not the case. Even though it has much more weight than in the other books, the relationship between Riyad and Danielle is a disaster. There is zero chemistry. The love they claim to feel is so unrealistic that I don’t think they are going to last long. The weak foundations of their relationship can’t barely hold that epic love the author describes. It’s just absurd.

This time the child involved in the story doesn’t come from a previous relationship or “accident” between strangers. Sadly, that doesn’t stop the author from once again make light of the serious problem of unsafe sex. But in this case goes even further with some horrible comments by Riyad. It seems that the Sheikh always use protection like a good boy, but with Danielle he ignores it because he thought of her as the mother of his kids??? OK. Two things you piece of shit: first, protection is not only to avoid pregnancies. Why none of these so-called adults mention the risk of STDs? And second: don’t you think, mate, that the woman should have a saying about having your kids? Do you even care about her or she is just your breeding machine? That comment of Riyad was simply insulting.

And the cherry on top was the fact that the characters that we met in the previous books are ruined. The weird bahaviour of Iman and Bahir toward Danielle is so out of character that I could barely believe what I was reading. And Natalie buying friends for Danielle was shameful… That is not being loving and caring… that is being creepy and akward. And there are plenty of other examples that make this book a much worse experience.

I think this review is way more bitter than I expected. The story is not so bad. There is a good but barely used mystery plot that makes the whole deal bearable. Not enough to compensate the rest, though.