Though Elle Saunders grew up in Florida, life hasn’t always been sunny. When she and her best friends take over the summer camp where they met as kids, things start looking up. But the camp, now a sexy getaway for wealthy guests looking for fun and romance, is definitely a handful. And the hunky brothers she hired to help manage things aren’t making life any easier—especially that Liam…

Liam Costa wrangled this job to confront the woman he thought had seduced his father and lured him away from the family business. But Liam didn’t count on Elle being so mesmerizingly beautiful, and suddenly he’s having trouble focusing on, well, anything but her.

Elle and Liam have been dancing around each other all summer. He’s powerfully drawn to her, and she to him, but Elle doesn’t trust herself with love. She’s had bad luck with men, and he’s a sexy distraction she can’t afford.

I have been lucky enough to get an ARC of the second book in the Wildflowers saga. If you read the review of the previous book, you may know I was positive about reading the next ones. Time has put the saga under another light and I wasn’t so sure about reading them outside of a platform like NetGalley. I didn’t properly acknowledge the bad feeling I had after finishing Summer Nights. A bad feeling that has been confirmed with the second book.

We go back to the camp and in time to fully meet Elle, the soul of the project to build a camp for adults. We get to read from her perspective the first days of the life in the camp. We also get to know better Liam, the youngest of the three insanely hot brothers who are desperately seeking their father. Liam’s mission is to get close to Elle to reveal any kind of participation by her in their father and money disappearance. It doesn’t look like the perfect setting for a blooming love, but I guess closeness makes things cozier…

The story of this book has been utterly disappointing. Or, better said, the lack of an original story is the biggest issue that hugely hindreds the enjoyment of it. Almost three quarters of the book is just to tell us again what happened in Zoey’s and Dylan’s book, but from the point of view of Elle and Liam. A point of view that doesn’t bring anything new to it; so it felt useless and extremely boring. Was it so hard to resume the story where the previous book left it? The most interesting part of that book was the mystery surrounding Leo Costa’s disappearance. A mystery that wasn’t resolved and was left in a rather interesting point. So it has been a huge letdown when most of the book is about retelling the same and just throwing a couple of new facts at the end of the story. Sorry, but it is lazy writing.

About the main couple, I feel like performing a copy and paste of my opinions about Zoey and Dylan. Nothing really bad or really good to make them special. They are so extremely OK that it is kind of boring. This time I can’t even mention the banter, because there is none. Is their romance bad? Not really. It just lacks any kind of spice to make it a tiny bit interesting. It doesn’t help that we were hinted about the relationship in the previous book, so there wasn’t anything surprising about it. Overall, the dynamics between Liam and Elle are kind of weird and it is pretty hard to forge any kind of connection with them, which enhances the feeling of being in front of a boring book.

I also would repeat what I said in the review of the first book: what is the deal with the ages of the characters? So ridiculously young, but then they are handled as if they had tons of life experiences behind them. I still have no idea why the author picked such young individuals if later they don’t behave like their age. Yes, it could happen that there were one or two characters that are way more mature for their own age, but it is a norm for everyone in this saga. It is annoying and utterly unbelievable.

I must admit that I’m not feeling like reading the next book. It looks like it will be the one for Hannah and Owen and the chances of having another retelling are way too high for my comfort. I would love to be wrong though, because I still want to know what is really happening with the missing father.

Even though it is almost a hollow book, I have still found several words I didn’t know. As my brain can only digest a new one at a time, I have picked this one to store it in my internal dictionary:

cornhole: Lawn game in which players take turns throwing 16 ounce bags of corn kernels at a raised platform (board) with a hole in the far end. A bag in the hole scores 3 points, while one on the board scores 1 point. Play continues until a team or player reaches or exceeds the score of 21 by means of cancellation scoring.

I had to search for it in the Wikipedia. The closest thing I found in the dictionary was a slang definition that has nothing to do with what was hapenning in the book (it would be weird). It doesn’t look like a word I will use in my life, but it is a nice cultural snippet that I previously lacked. If you are curious, the Wikipedia article has several pictures. Here is one of the board used to play: 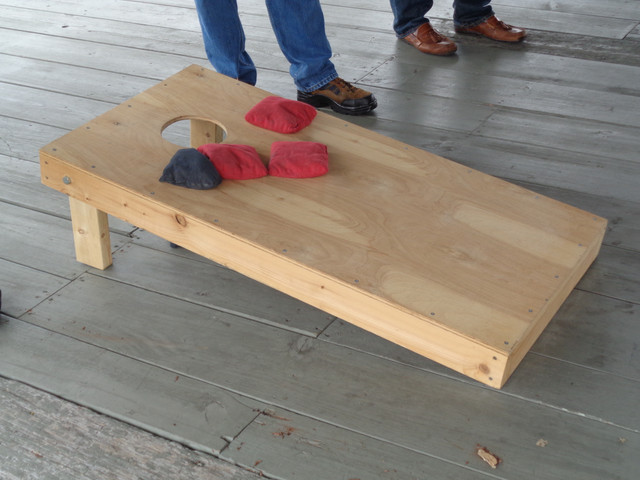