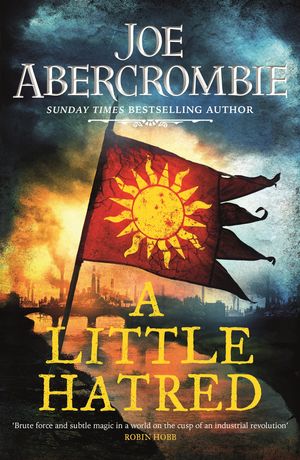 The chimneys of industry rise over Adua and the world seethes with new opportunities. But old scores run deep as ever.

On the blood-soaked borders of Angland, Leo dan Brock struggles to win fame on the battlefield, and defeat the marauding armies of Stour Nightfall. He hopes for help from the crown. But King Jezal’s son, the feckless Prince Orso, is a man who specializes in disappointments.

Savine dan Glokta – socialite, investor, and daughter of the most feared man in the Union – plans to claw her way to the top of the slag-heap of society by any means necessary. But the slums boil over with a rage that all the money in the world cannot control.

The age of the machine dawns, but the age of magic refuses to die. With the help of the mad hillwoman Isern-i-Phail, Rikke struggles to control the blessing, or the curse, of the Long Eye. Glimpsing the future is one thing, but with the guiding hand of the First of the Magi still pulling the strings, changing it will be quite another…

The Circle of the World will never win an award for the most coveted touristic destination, but it is a hell of a place to find good stories and amazing characters. You just have to survive long enough in that crazy and messy political mess that is getting muddier with every book that comes out of Joe’s mind. And I couldn’t be happier for it! This new book puts the saga again in the right track, after a book that was a tad weaker than what we were used to. Let’s pack and travel to The Age of Madness!

About thirty years after the end of the first trilogy, we go back to Adua and the North to take a peek at the new Union under the constant vigilance of my most hated baldy, a.k.a. Bayaz. Except for a boom in industry, almost everything looks the same. The North can’t be the North without a war or two, so the King Scale, alongside his brother Calder and nephew Stour, is fighting against Dogman and his Union friends. The Great Wolf is ruthless, but he will find himself facing the brave Leo dan Brock aided by Rikke and her visions of the future. Will they satiate their thirst for glory or drown in their own blood? Sadly, Leo can’t expect help from Adua. Prince Orso had forged a small army to go help him, but a revolt in Valbeck, one of the cities with more industry and worse job conditions, provoke a change of plans. It is the perfect moment for Orso to prove himself as the future King. Unless there are other factors making their own move…

It is not a small book, but the pages flew before my eyes. If I had more time to read, I would have finished this book way sooner. Many days I went to bed with an unsettling feeling due to the story and counting the hours before I could get comfy in bed to keep reading. And yet, the story is rather simple. It is a simple war in the North. It is a bloody revolt in Valbeck. Nothing fancy or even lenghty. As it usually happens with this saga, its main strenght is the amazing cast of characters that take part in the plots. I do not want to belittle the story, though. It is very entertaining with a lot of nail biting moments that will be more than enough for people that need more than superb characters. All that without forgetting a bit of worldbuilding: we get to see how much Adua has changed and how little the North has. It feels like a natural evolution from previous stories, even though the temporal jump is rather big. I wouldn’t read this new trilogy without reading the stand-alone books that were published after the first trilogy. Many details will be lost to you if you don’t follow the meant order. Yeah, they are not game breaking details, but they give this book a thicker layer of depth.

But as I have already mentioned, the most impressive muscle of this book is its well oiled cast of characters (muscles and oil in the same sentence… naughty, naughty). I bet the author has a lot of fun moving his pieces all over the board and that has a very positive effect in the story. You can almost touch the writer’s enthusiasm with his little playthings. All that happen with the characters is for a reason. Sometimes it will be obvious almost immediately, but other times we must wait to see the consequences and ramifications of some actions. No better way of keeping me engaged, if I have to be honest. At first I was afraid of not liking the new guys, but it was just my own non-sense talking. In any case, the newbies are usually in the presence of some of our beloved old glories; which helps a lot for a smooth transition. We have Jezal helping his son Orso. Glokta training his daughter Savine. Dogman, Shivers and Finree helping Leo and Rikke. Tenez, Calder, Scale, Gorst, Bayaz, and Yoru are also in the book to help with nostalgic pangs.

From all of the new characters, maybe my least favourite would be Rikke, The Dogman’s daughter. It is a pretty interesting character, but I’m not sure what is her deal. Sometimes is a damsel in distress and in the next one she is a bloodthirsty savage. I have enjoyed a lot her honesty in front of big wigs like Savine or Orso, but dislike her attitude surrounding Stour and Leo’s decisions. The Long Eye mechanics are also a bit unclear. Sometimes her visions are like metaphors and other times they are pretty literal. Let’s see how her character is developed in the following books before making a definite decision about her.

A nice surprsied has been Orso, the Prince. At first he looked like a womanizer with an annoying habit of drinking too much and using drugs. But when the shove comes to push, he rises to the challenge and his true colours are shown. Too bad not everybody is happy about it… I have the feeling I’m going to suffer a little bit with this guy. Until the big revelation (that shouldn’t have been such a big surprsie, by the way), I was enjoying the strange relationshiop between Orso and Savine. Glokta’s daughter had to fill some really big shoes, so I’m glad she is not at all interested in them. She is her own character, but Savine shows some of her father’s cunning as the aggressive businesswoman she is. I’m not sure which role will she have from now on, but for some reason I predict a journey through the Dark Side…

I’m going to be pretty obvios here: my favourite new characters is Leo. Is it weren’t for his racist and homophobic comments, the Young Lion could be on my list of book boyfriends. And those comments are so weak and lame, that I could forgive him pretty easily in future books. I have enjoyed waaaay too much his naivety in almost all aspects of life. Always puffing his chest, but seeking to please his mother. But the reason that has made me seek his chapters with eagerness is not other than Jurand. His best friend. The guy who has a crazy crush on Leo dan Brock and has to suffer his obliviousness. Unrequited love sucks, but it makes for a really fun read. I’m shipping them so hard! I read too many Romance novels, I know… I blame Rikke for the images she put on my head, though.

And the ending. What can I say about the ending without spoiling anything? The ending is a literal stab in the back and front in the North and a metaphrical stomach punch in Adua. The ending has only made me wish harder for the death of that hideous character whose smile makes me puke. I needed justice when the first trilogy ended. Now I crave it. This can’t go unpunished much longer. Although I’m afraid he has too many new toys to play with… so he is not going away any time soon…