His greatest prize can’t be won in the octagon.

Champion MMA fighter Adam Littrell needs no distractions as he prepares for the fight that will determine whether he retires. But when he opens the door of his swanky Las Vegas home to his new personal assistant, Bo Wilkins, staying focused becomes a struggle.

Aware of Adam’s surly reputation, Bo doesn’t expect to like his new employer, let alone fall for him. But Bo is pleasantly surprised when a shared love of books leads them to study for their GEDs together and plan for a life after their current careers. Adam won’t be able to fight forever, and Bo wants a relationship on equal footing.

But just as their relationship is getting off the ground, the sister Bo raised needs his help, and he drops everything. With Adam’s final match looming and Bo in a different city, reuniting will be the real challenge.

I swear that my resolution of not starting new sagas until ending the ones I’m currently reading is an honest one. For some reason, I had this book in my stand-alone pending list; so learning that it is actually the first one of a saga came as a surprise. I guess I could have changed my plans and read another book, but I hate that. When I pick one to read is because I feel like reading it. In six months I may be in another mindset and the book could be ignored. That would have been a shame. Let’s warm up and face this story in the octagon!

In Las Vegas, Adam is known as the Beast. The infamous MMA champion has a reputation of being a tough guy who eats puppies for breakfast. The cuter, the better. He may be the King at his job, but he is just very clumsy dealing with the rest of his life. So he needs an assistant to take care of his needs while he trains. There enters Beauregard, Bo from now on because that is what he prefers to be called and it is something I can actually write without checking ten times if it is OK, the brand new assistant! He is obviously intimidated by the Beast reputation, so the prospect of living with him makes him nervous. But he needs the money badly to pay for his sister’s education, so he is ready to face anything. Little he knew that Adam’s secret weapon is not a deadly combo with his fists (not a fisting joke, I swear!!!)…

I’ve been disarmed by this book! I wasn’t prepared for what I have found inside its pages. Judging it by the cover and the blurb suggested this was going to be the classic fast love, hard sex and extremely happy ending. But nothing further from reality. The first half of the book is a rather sweet story with a slow romance that made me giggle more than once like a silly teenager. Actually, the dynamics between the characters during those moments are rather similar to the ones you can find in a story written by Anyta Sunday. If you like that author, I think you could enjoy this story, too.

When I say is sweet and slow the first half, that is because the story changes rather abruptly. That hard sex I was expecting from the beginning makes a sounding debut and it doesn’t leave until the end. Well, maybe I’m taking that too far. They take a breath now and then. Even though the slow is removed from the equation, the sweet is always present; which makes the deal more special and it is what sets it appart from other similar stories. All that said, I’m not really happy with how the change happen. Both characters wanted to be professionals and not mixing job with love, so I’m not sure what happened to make them change their minds so fast and without any hint of getting there. One moment they are listing over and over again why getting the other naked was a terrible the idea, the next they are getting naked… Some development there would have been nice, but I won’t complain too much taking into account that the author manages to write a beautiful romance (slow or fast).

My loyalties are pretty clear in the characters department. I do not dislike Bo, but I can’t force myself to say I like him. There is nothing noteworthy that has made me less sympathetic towards that character. It’s his general way of being that made me frown now and then. Or it could be just jealousy from my part. Never discard that, my faithful readers! What possible reason I could have to be jealous, you may ask? Well, Adam the Beast is a fine piece of character. When I grabbed the book I tought he was going to be the classic grumpy guy, who barks orders to anyone he considers inferior (about 98% of the global population). Always frowning. Master at using monosyllabic words. The kind of guy who has banned the word nice from his life. Buuut it is just the opposite in all fronts. He is easy to talk to, polite, charming, good friend, concerned citizen… Bo was expecting a Beast, but he found Prince Charming, instead. And if you are also wondering if he is as sexy in the outside as he is in the inside, let me tell you in this book you will find some of the most exagerated descriptions of male hunkiness I have ever read. It is a bit over the top, but it clears any doubt. With a guy like that, you may understand why he has been added to my book boyfriend list, so… move along! Nothing for you here!!

Apart from the sudden changes of direction during the plot, there is also something else I’m not happy about. This story spins around the subject of money almost all the time. Sometimes it felt that Adam was buying Bo affection, always dropping insane amounts of dollars to help the poor guy. I know the situation granted for that, but it plays dangerously in the limit of my comfort.

I was expecting a Beast and I couldn’t find any, so I picked a beastly new word in English to fill the gap:

prairie dog: any of several burrowing rodents of the genus Cynomys, of North American prairies, having a barklike cry: some are endangered 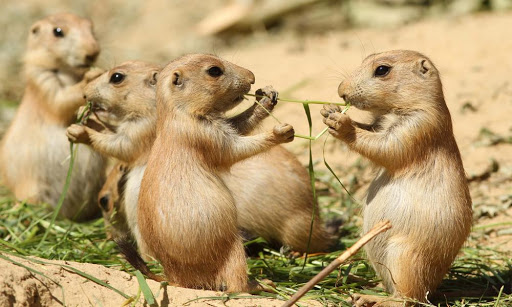 Where the hell is the justify allignment in the new editor? And the Code View is messier than before…

2 thoughts on “Review: Beauregard and the Beast by Evie Drae”