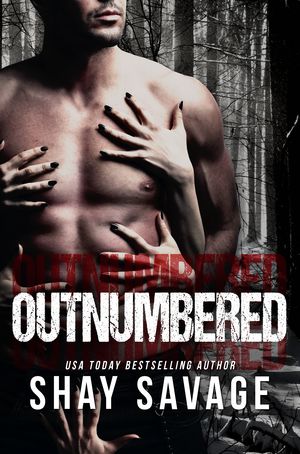 I’m not exactly the social type. After spending most of my formative years in prison, I prefer an isolated existence in the wilderness of Canada’s Northwest Territories, making what little cash I need guiding tourists to the best hunting grounds. I have no desire for company; I crave solitude instead, especially during the subarctic winter months, but what am I supposed to do when I come across a woman in distress? I can’t just leave her to die in the cold, and a storm is on the way.

So now we are confined to my secluded cabin, and I quickly realize there’s something not quite right about Seri—or is her name Netti? She switches moods faster than a snowshoe hare changes direction. In fact, I’m starting to think there’s more than one person behind the mystifying woman’s intense, green eyes.

Physically, only two of us are trapped inside the rustic cabin, but I still feel outnumbered.

A very intriguing blurb if you ask me!! I have no problem about reading more conventional Romance, but when something that smells different crosses my path… It gets a bump on my list of pending books. Different doesn’t mean the book is going to be better, but at least the author is trying to push the reader out of their comfort zone. Romance with criminals is kind of new for me, so I had no idea what I could find and what I would think of it. This book hasn’t cleared my doubts about criminals in love, but it hasn’t made it worse.

The book is narrated from the point of view of Bishop, a fugitive that killed his abusive father and is living in a remote cabin in Canada. He has zero social skills and uses his isolation as a shield against human interaction. But the winter is coming and it is pretty hard up there; so when Bishop finds a woman almost unconscious near his place, he has no other option but to take her with him. That woman is Seri, a mysterious lady who is obviously running from something or someone. Due to the heavy storm, both of them have to tolerate each other in the small cabin that Bishop calls home.

The author is capable of hooking the reader pretty fast with the several personalities of Seri. Everyone of them with a different name. Seri is the happy, good girl. Iris is the bad-girl and foul-mouthed one. Netti is the calm and cold that mediates between them. The catch: Seri doens’t know about the other ones. Add that to Bishop’s ineptitude with other human beings and you will have an ejoyable situation where the reader has to unravel Seri’s mystery at the same time Bishop does. And that is the strongest part of this book. Sadly, during several chapters that situation is stuck in a loop that makes those chapters plain boring. The book would have been much better removing them and the reader wouldn’t have lost absolutely anything.

I guess this book is not for everyone. The main character is an unrepentant murderer that is haunted by violence every single day of his life. Bishop keeps imagining the death of everyone that surrounds him, so it can’t be hard to like him when he would obviously hate us. It’s a character that represents some dark corners of the human species, which could easily make the reader not root for him. Shay, keeping that in mind, works extra-hard to make him likeable when he is with Seri. At the end, you don’t feel he is an ex-con… just a weird guy with poor social skills. And the cat, Solo, helps a lot to bring out the best parts of Bishop’s soul.

I’m not going to comment about how the whole deal with Seri’s personalities has been treated. I have zero experience with that kind of mental disorders. I trust the author, who has a degree degree in psychology, has treated the situation fairly. But I must be honest and say that sometimes I thought I was reading some Paranormal Book… but that is problably just my ignorance.

And I can’t finish this without complaining about the smoking… I hate when Bishop smokes. As simple as that. It makes the book so much worse… I couldn’t stop imagining the horrible smell in such a small cabin… Disgusting!!

Overall, the book is very nice. Too slow, though. And the end… it doesn’t feel like an end. I hope everyting remains fine for them, but there are too many unknowns in their lives…